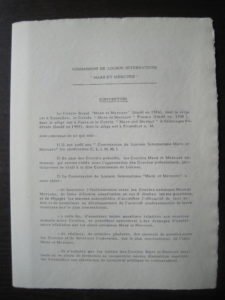 In the the aftermath of the First World War, following a chain of events within the Belgian army – 1919: demobilization of auxiliairy and reserve officers; 1923 and 1926: disengagement of surplus cadres; 18 December 1925: publication of a Royal Decree encouraging to leave the army – Maurice Van Glabeke created in Belgium on 23 January 1926 together with his colleague Henri de Saedeleer an industrial and commercial grouping of former officers, non-profit association.

This association was a grouping of former officers – reserve officers were not mentioned – the purpose of which was “to group together former officers in order to make it easier for them to carry out their respective professions, to establish business relations as close as possible, to seek additional activity for associate members, to facilitate the access to business related jobs for officers having left the army”.

The former officers wished to maintain frequent contacts, in Belgium and abroad, between men determined to apply in their business relations the spirit of righteousness and reciprocal esteem learned under arms.

“The former officer, by his mentality of order, method and discipline, is particularly qualified to contribute to the necessary rationalization of jobs in our companies”.

Ultimately, they wanted to make their skills and business relations available to all.

There was also the desire to be part of the elite. The professions required to be a full member were: industrial, banker, entrepreneur, merchant, engineer, sales representative, and broker, not to mention any other profession admitted by the association. The denomination “circle” first appeared in 1928, without abandoning the term “grouping”. Under the second Presidency there were many changes, as the name which was changed to “Industrial and Commercial Circle of Former Officiers and Reserve Officers”. Indeed, the circle was open to reserve officers as well as to former active and campaign officers.

The ideal of the circle would change over time by adding solidarity and the social aspect to the principle of business camaraderie and compulsory benevolence. The circle will now be called “Circle Mars & Mercury”, Industrial and Commercial Circle of Former Officers and Reserve Officers.

At the end of the Second World War, the search for jobs became a priority, as did solidarity for the benefit of prisoners.

It was finally on 9 July 1951 that the circle was authorized to bear the name of “Cercle Royal Mars & Mercure” and obtained on 20 July the high patronage of H.M. the King.

In 1957, on the occasion of a reception organized in honor of Paul-Henri Spaak, Minister of Foreign Affairs of Belgium and Secretary General designate of NATO, which brought together in particular twelve NATO ambassadors or ministers, the President of the Royal Circle Mars and Mercury appealed: “We would like to suggest to former NATO officers with the same ideal as us, it goes without saying in a spirit of total autonomy, to create Mars and Mercury Circles. of the same spirit as ours ”.

The idea was to create a circle in each of the NATO member countries.

In June 1958, an autonomous circle of Mars & Mercure France was born in Paris. A Dutch delegation was going to contact Belgium to create a circle in the Netherlands.

In November 1959, we witnessed the creation of the circle Mars & Mercury Germany in Frankfurt.

In March 1960, under the impetus of the Belgian President, Baron Vincent de Gallataÿ, the Belgian, French and German circles signed a convention establishing the “Mars & Mercury Inter-Nations Liaison Commission” (CLIMM). The purpose of this Commission was to promote the establishment of close cooperation bonds between the national Mars & Mercury circles to study any issue, to identify ways to increase the effectiveness of their action and to contribute to develop the professional activity of their members at international level.

Other circles with the same ideology were subsequently created which joined the CLIMM, notably in The Netherlands, 1960, in the Grand Duchy of Luxembourg, 1964 and in Denmark, 1975.

On 29 November 1991, a convention was signed changing the name of the CLIMM to “Mars & Mercury Europe”, which is intended to be an “Inter-Nations Coordination Commission”.

Successively joined thereafter Switzerland and Spain in 1999 and Poland in 2004.

Mars & Mercury Europe is made up today of the national circles of Germany, Belgium, Denmark, Spain, France, Grand Duchy of Luxembourg, the Netherlands, Poland and Switzerland.

To improve international relations, Mars & Mercury Europe had already organized several symposia in the past.

By way of example, a symposium of February 4, 1994 which was held in Brussels and with the theme “European security problems”. Speakers, apart from the host authorities Mars & Mercury, were Mr. W Van Eekelen, Secretary General of the WEU, General PH Carstens, SACEUR and Willy Claes, Minister of Foreign Affairs of Belgium.

Also, the European Mars & Mercury Forum of May 30, 1997 was held at the Military School in Paris. The topic “Which Reserve Officers for Tomorrow ” was moderated by General Michel Malfait and brought together participants as General E Richter (DEU), Vice-Admiral E Poullet (BEL), MJ CL Mallet (FRA) and the Maj Winkelman (NLD), debate followed by several conferences of senior French officials. 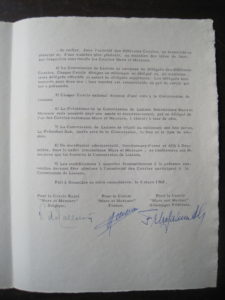