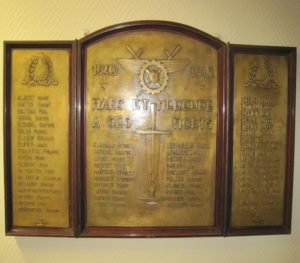 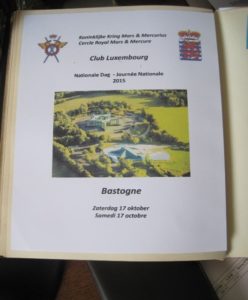 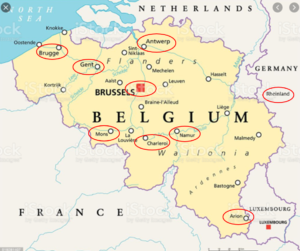 The association was created at the end of January 1926 by Maurice Van Glabeke and Henri De Saedeleer.

Official recognition was published in the Moniteur in 1927.

The “Industrial & Commercial Group of Ex-Officers” started with around 400 members in 1927.

The denomination “Mars & Mercury” first appears in the 1930 yearbook, which will be in 1933 officially completed with “Industrial and Commercial Circle of Ex-officers and Reserve Officers”, which was the name in use since August 1929.

In 1932, the Cercle had 6 regional clubs: Brussels, Genth, Liège, Bruges, Antwerp and Mons.

During the 1940-45 war, many members participated in combat as part of the Resistance or of the British army – 55 members were killed in action. Two examples are the former Presidents of Mars & Mercury, lieutenant Colonel Eddy Blondeel, civil engineer and dentist, one of the founders of the Belgian para-commando company, who died in May 2000, and Colonel Baron Jean Bloch, who died in 2002.

After the Second World War, Mars & Mercury experienced a remarkable development, and on July 9, 1951 exceptionally obtained from the Prince Royal, after only 25 years, for services rendered the qualifier of royal society and on July 20, 1951, from the same Prince, who in the meantime became the King Baudouin, the high royal patronage, from which the association still benefits.

A beautiful period of prosperity follows with important conferences and galas attended by all kinds of eminent personalities, as members of the royal family, or the most senior officials of the political and military world, industry and the business world.

Following contacts with France and Germany, on March 9, 1960, at the instigation of the Belgian President, Baron Vincent de Gallataÿ, the convention creating the CLIMM  was signed by the three countries present (for details see the history Mars & Mercury Europe).

Mars & Mercure Belgium had up to 1845 members in 1957. Subsequently, a slow decline in the number of members was recorded. A major blow was struck on January 1, 1994 with the abolition of military service in Belgium, which dried up the main source of members who were the reserve officers.

In recent years, officers who are still active and some non-officers, who respect the same standards, who have the same mentality and who can represent a plus for the association, have been sparingly admitted.

The Royal Circle Mars & Mercury brings together reserve officers, active officers and former officers of the armed forces and gendarmerie. Following the example of the classical gods, “Mars” represents the military past of the members and “Mercury” symbolizes the meaning of entrepreneurship and business. Members are aware of the values ​​they have acquired during their training as an officer and the responsibilities they assume in civilian life.

The members of the Royal Circle Mars & Mercury put their expertise and experience, their business relationships and their dedication at the service of each other and in the interest of the country.

Together they look for ways and possibilities to promote moral courage, social and responsible civic spirit and entrepreneurship.

In doing so, they wish to promote collegiality, tolerance and understanding between the Communities of the country and, by virtue of their Mars origin and their Mercury orientation, want to form a link between the Army and the Nation.

With a view to symbiosis and cooperation to raise public awareness of defense issues, they are open to the world’s problems and their possible solutions.

They support the European idea.

As needed, Working Groups are created: Reclassification, Defense, Economy, Strategy, Members for Members,…. , or as in the past Referendum 2004 or EconoMeet.

The Circle organizes each year, apart from the meetings of the Board of Directors and the Bureau, in the spring a General Assembly, and in the fall a National Day which includes during the morning an academic part, with illustrious speakers, and by the following a gastronomic part often followed by a cultural, scientific or industrial visit.

Sometimes, a single Conference, an Economic Forum (Examples: Mons 1999, Royal Military Academy Brussels 2017), a Symposium or a Joint Event with Defense are organized.

Every quarter, a national newsletter is published, currently in electronic form for Internet users, and in paper form for members who do not have this possibility, and for certain external organizations.

Annually, a Medal of Recognition is awarded to a deserving member and sometimes to an outside personality such as the Royal Princes  – King Leopold III in 1937, Prince Baudouin in 1951, Prince Albert in 1957, Prince Philippe in 2001 .

At the regional level, the Circle is made up of 10 regional Clubs:

The clubs organize monthly, during the day or in the evening,  an activity which is mostly a conference on a military, economic or scientific theme, usually accompanied by a meal. From time to time, visits of factories, of landmarks or ancient battlefields, are organized.

Some Clubs do not have a fixed day for their monthly meeting, but others do: Antwerp on the last Monday at noon, Charleroi on the 2nd Friday, Limburg & Kempen on the 2nd or 3rd Tuesday, Luxembourg on the 3rd Wednesday, Mons on the 1st Friday , Namur on the 2nd Friday.

Following the pandemic COVID 19, activities in 2020 have been limited to video events and meetings.

Some Clubs are twinned or have more continuous relations with each other, both at national and border level :

A bilingual history (FRA / NLD) of the Belgian Circle, going up to the year 2000 was written and edited by BrigadierGeneral ret. Guy Melchior, honorary National President as well as honorary President of the Club Luxembourg, entitled :

A recent update is available. It may be obtained from the author for a very small amount ( € 9,- ) at the email address:    u2albatros@me.com 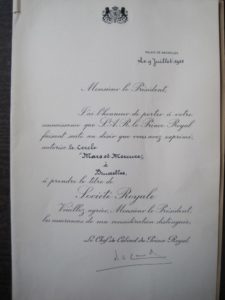